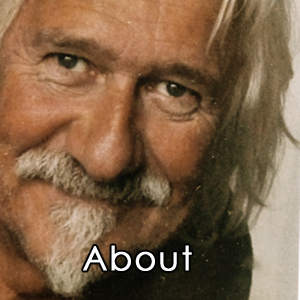 John Drake was in London in the 1950s. He started his career in a photographic darkroom and went on to become a photographer in London. After much traveling throughout Europe and India he found himself in New York, after taking a freighter from England to Jamaica (these adventures can be found in his first memoir called THE LAUGHING MAN).

After settling in Manhattan (The Big Apple) he began a new career in the film business, and after a few years was working as a Director of Photography on feature films and commercials. In 1987 John moved to California where he worked as a director/cameraman for various companies in the United States and Europe.

Around 1998 he found a new Love in painting, and after a couple of gallery openings of his work now has over 600 paintings to his name. In the same year he had a photo exhibit of his still photographs on Melrose Avenue in Los Angeles.

In 1999 John moved to Vancouver to continue working in film, but still keeps a place in Santa Monica. In 2004 he went to India to film a Bollywood product called 'My Faraway Bride'.

He still continues his nomadic gypsy lifestyle and lives in Mexico for half of the year, coming and going between Mexico, California and Vancouver.